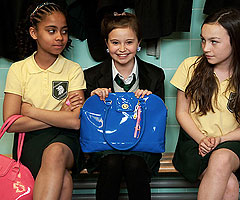 Stepping Up for BAFTA's

LA Productions childrens drama Stepping Up has received two nominations in the Drama and Writer categories at this years BAFTA Children's Awards, which honour the very best in children's media. The ceremony will be held on Sunday 24 November at the London Hilton, Park Lane.

In addition, the BAFTA Kids' Vote launches today, in which children aged between seven and 14 years have their say in a nationwide poll to choose their favourite film, television programme, website and game. Children can cast their votes at www.baftakidsvote.org

Stepping Up focuses on children who are experiencing the transition from primary to secondary school. The five stand-alone dramas, which were penned by different writers, are themed around the new challenges children face when moving into this new and sometimes overwhelming environment.